A few of these were done back when I owned Three Brothers Marine and had the benefit of a shop to do the repair in. Working outside in the weather sometimes cramps the progress on some jobs. There are some jobs though I have completed using OPS (other peoples shops). No matter where the work is done one thing I have found is that no two jobs are ever the same. That I guess is what makes this work such a fun challenge. 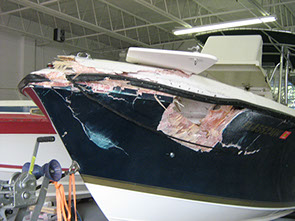 A CONTENDER TAKES A PUNCH TO THE NOSE

This boat got hit by a same size Wellcraft as they both rounded a curve in the river from opposite directions. Though the damage looks bad the contender was able to rescue the crew of the Wellcraft (which was sinking) and bring everyone back safely.

The hull and the top were reshaped using plywood forms and stitched back together on the inside. Then  all the fractured material was removed on the opposite side and then re- glassed back to form. It was about a three week process and was rebuilt back to Contender spec's. It is still on the water today operating over in the Big Bend area of Florida. The owner now slows down for curves in the river and looks for on-coming boats.

SHE WAS HIT FROM THE SIDE...

IMPACT WAS ABOUT 5' FROM THE NOSE

THERE WAS A BULKHEAD INSIDE JUST AT IMPACT...

DAMAGE CUT BACK TO GOOD MATERIAL

ANOTHER SHOT OF THE INSIDE BOW

GETTING READY TO START

VIEW FROM THE OUTSIDE

SPLICING THE GOOD PARTS TO GET THE SHAPE

GLASSING INSIDE AND OUT GETTING READY FOR CORE

GETTING READY TO REBUILD TOP

GLASSING AND RE-CORING THE INSIDE

ALMOST READY FOR THE CAP

TOP BACK IN AND GLASSED DOWN 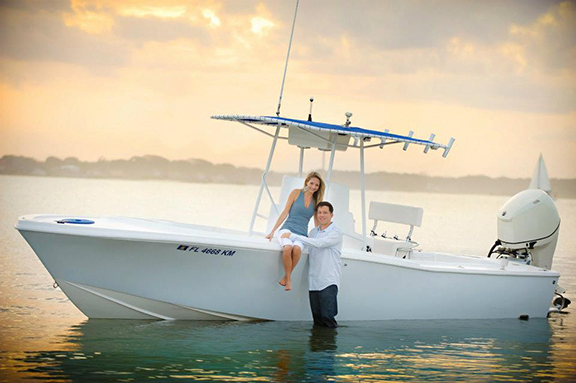 This is one of my more favorite projects I've done. It was a wreck of a boat when it came in and we totally stripped it down to hull and rebuilt it new. There's nothing like an old classic brought back to life. The boat was so good looking they used it for a back-drop for their engagement pictures. The boat flat turns heads every time he takes it out.

Not all old boats are candidates for such an overhaul as this. By tearing it down to just a hull we were able to redesign what Mako started and build it back to a total custom and modernized configuration that matched what the owner wanted in a boat. It becomes at that point a one of a kind.

Rebuilds such as this are not always cheap but this build was far less costly that buying a new one and the best part is it is just exactly what he wanted. 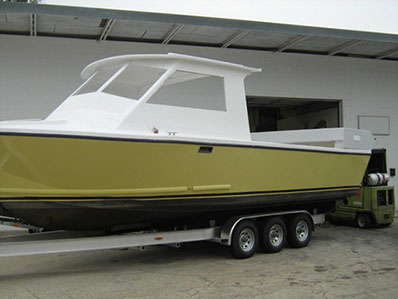 Fellow bought a 34' hull with a single diesel and needed a wheelhouse and culling platform built that was light and water-proof. I built it in panels to fit the boat and when finished it only took two of us to lift it on and install it. Once together it was super strong and is now an integral part of the hull.

I used a nylo-board for the core and wrapped it in 4-6 layers of chop with 1 layer of bi-axle sandwiched in. The roof was curved with rain deflectors built in to funnel the weather away from the working areas.

The work platform on the stern was built the same way except heavier on the actual work areas to ward off excessive wear from the planers and rig. All of this at 2/3 LESS weight, 2X strong, and will last forever.

CABIN FASTENED AND PLATFORM ON

EVEN GLASSED IN HAND RAIL ON TOP

RAIN DEFLECTOR ON BACK

BRACED INSIDE FOR EQUIPMENT MOUNT

CULLING TRAY IS REMOVABLE FOR OTHER FISHING

TRIPLE GLASSED ON BACK FOR WERE RESISTANCE

READY TO GO TO WORK

BACK TO THE TOP ▲

or leave me a message on the contact page!